The City of Pasay is one of the cities and municipalities that make up Metro Manila in the Philippines.  The City is known for its leisure and entertainment establishments – business-restaurants, coffee shops, and clubs, particularly those located along Roxas Boulevard, facing Manila Bay.  A large part of Metro Manila’s “tourist belt” is located in Pasay City.

Federal Land started developing The Metropolitan Park (“The Met”) in 2002.  With 40 hectares of developable land, opportunities abound in The Met. And through the years The Met has evolved to become one of the country’s prime estates.

Located in the heart of the sprawling The Met at Roxas Boulevard, Bay Garden Club and Residences attracts residents to enjoy a vacation-like lifestyle even in the city.  With the enduring charm of Manila Bay’s sunset, calming view of the sea and the refreshing tropical landscape, Bay Garden has become a luxurious home and island resort in one. Visit http://baygardenclub.com/ for more information.

SixSenses Resort by Federal Land launched its three towers one after the other, namely I-Tune, I-Sight, I-Touch, I-Scent towers in the future development of the Metro Park at the Bay Area CBD.  The residential condominium project is expected to infuse a laid-back chic and family-friendly vibe to the mixed-use community where it will be located. Two more towers to be launched!

The sprawling Metro Park, a master-planned community designed by top-notch firms acclaimed for their international project portfolios, is envisioned to complement the overall development of the Bay Area as the next premier commercial and business district in Metro Manila. Over the next years, Federal Land will embark on transforming the massive area into a mixed-use development composed of residential condominiums, retail areas, and cultural and institutional sites. The development is being positioned as a major destination, where the residents will be privileged to be among the first to experience the newest local and international brand and product offerings. World-renowned Arquitectonica, Getty’s Chicago, H1 Architecture, EA Aurelio Landscape Architects are the team of experts behind the SixSenses Resort. Luxury starts at 15,000.00/month. For your inquiries, http://sixsensescondo.com/inquiry/ 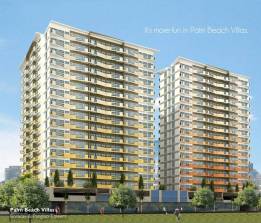 Pasay – Bay City, a master-planned community along Manila Bay in Pasay City, adds luster to the splendid panorama as it hosts a variety of seaside restaurants, shops and entertainment hubs for families and leisure lovers.

Surprisingly, living in the area is a vision within reach. Property developer Federal Land’s subsidiary, Horizon Land, is ushering in Palm Beach Villas, a two-tower residential condominium within Bay City’s Metro Park namely Boracay Tower and Panglao Tower. For details about this project, email at info@federalcondos.com

Palm Beach West is a four-tower development that rises within the sprawling MET PARK, between the two most traveled boulevards, Roxas and Macapagal, in Pasay City. It provides your family a safe and secure home, with amenities for the enjoyment of the family and a neighborhood bustling with life and excitement.